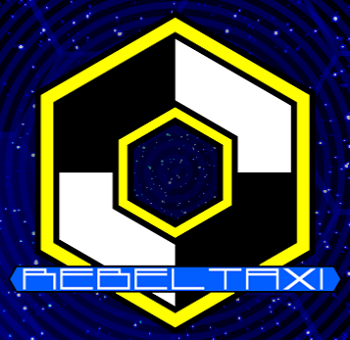 "It's juice-and-jam time."
"Like WatchMojo with standards."
—Pan on his own channel.
Advertisement:

Rebel Taxi is a web series created by Pan Pizza.

The show mainly consists of Pan sitting in said taxi, reviewing various things, mainly having to do with cartoons, Cartoon Network shows and related media, and whatever catches his eye at the time. It takes inspiration from Toonami bumpers and reviews, as well as Classic Game Room, with an art style and oftentimes Not Safe for Work sense of humor inspired by Panty & Stocking with Garterbelt.

and Mr. Coat And Friends.

Pan also has a Tumblr

for the show, and two other YouTube accounts, one for his video game reviews and Let's Plays,

and one for miscellaneous footage

such as Comic Con footage and uncut audio for podcasts. The show is part of Frederator Studios' Channel Frederator network.

Videos normally update every other Tuesday, the remaining weeks occupied by episodes of the Pizza Party Podcast, an extremely bizarre animation-themed podcast.

"I await your tropes..."
Feedback

Example of:
Just Here for Godzilla