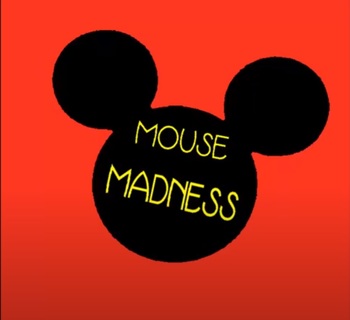 "This Mouse is Mad!"
Advertisement:

Mouse Madness is a podcast discussing every installment in the Disney Animated Canon, as well as pitting them against each other in a tournament-style fashion inspired by the NCAA Basketball tournament.

After the 2020 March Madness was cancelled amid the COVID-19 Pandemic, Nicholas Huene got bored one day and watched a few Disney movies. After hearing there were almost enough films to fill all 64 spots, he made a tournament inspired by March Madness to fill the void. The idea received such great support, he and a few collaborators decided to make a podcast discussing these films and the matchup results.

Seeding was done combining the average of the film's scores on Metacritic and IMDB, to try and find a balance between popular and critical consensus. The #1 seeds were Beauty and the Beast, Fantasia, Pinocchio, and The Lion King. Since there were not enough films to fill all sixty-four slots, those films plus the next highest ranked films (Snow White and the Seven Dwarfs and Dumbo) all got automatic bids into the second round. Though the real fun began once the first round was over.

The podcasts themselves are full of great humor and a revolving door of panelists recorded via Discord. This leads to great humor and surprising analysis of every film, which makes listening fun.

Coverage of the tournament (except Round 1, Week 8) is available on YouTube

. Votes were conducted on the host's DeviantArt