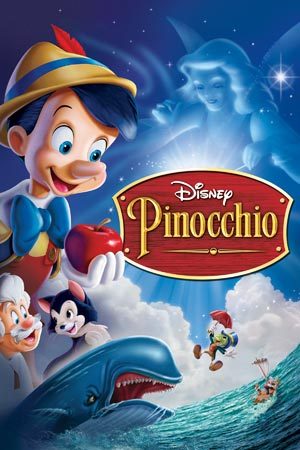 "When you wish upon a star,
Makes no difference who you are,
Anything your heart desires will come to you."
—Jimminy Cricket, The opening theme, and the theme of Disney as a whole.
Advertisement:

Released in 1940, Pinocchio is the second film in the Disney Animated Canon, based very loosely on The Adventures of Pinocchio by Carlo Collodi.

The woodworker Geppetto creates a puppet, which he names Pinocchio. Before going to bed, he notices the wishing star and wishes on it that Pinocchio would become a real boy. The Blue Fairy hears his wish and brings Pinocchio to life. She promises him that he will become a real boy if he can prove himself brave, truthful, and unselfish, and she assigns Jiminy Cricket to be his guiding conscience in the meantime.

The opening song, "When You Wish Upon a Star", is one of the most well-known and beloved songs of any Disney movie, and has since become the theme song for the Disney Theme Parks. A brief excerpt of the melody is used in Disney's Vanity Plate (the one with the castle) at the beginning of many of their movies.

There are licensed platform games released in 1995 for the Super Nintendo Entertainment System, Sega Genesis and Game Boy. In The '90s, Disney created a Made-for-TV Movie musical, Geppetto, that switched the P.O.V. character to that of the toymaker and focused on his Character Development as he learns how to be a good father. Featuring songs from the original alongside new Stephen Schwartz numbers, it was adapted for the amateur theater circuit as My Son Pinocchio in The New '10s.

A live-action/CGI remake of the film was released exclusively to Disney+ on September 8, 2022 directed by Robert Zemeckis. With Benjamin Evan Ainsworth voicing the titular character, Tom Hanks as Geppetto, Joseph Gordon-Levitt as Jiminy Cricket, and Keegan-Michael Key as Honest John.

"When you wish upon a star, your dreams come true!"

Example of:
No More for Me