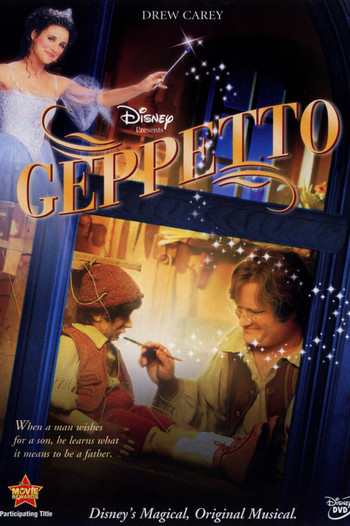 "Once upon a time not so very long ago, there was a little wooden puppet named Pinocchio... but alas, this is not his story. This is the story of that important but overlooked character, Geppetto. That's me, Pinocchio's dad."
Advertisement:

Geppetto is a Wonderful World of Disney TV musical released in 2000, starring Drew Carey, Brent Spiner and Julia Louis-Dreyfus, with songs by Stephen Schwartz. As the title suggests, it retells the story of Pinocchio from its maker's perspective.

After watching parents interacting with their children, Geppetto the toymaker (Drew Carey) muses how many of the mothers and fathers don't seem to be doing a good job of bringing up their kids. That evening, after closing his shop up for the night, he wishes how his newly-made puppet was a real boy, and that night, the Blue Fairy (Julia Louis-Dreyfus) appears in his shop and grants his wish.

Geppetto finds that parenthood is much harder than it looks, and after an argument, Pinocchio runs away, provoking Geppetto to go after him. Along his journey, Geppetto finds out what it means to be a parent.

The film was eventually converted into a stage musical entitled "My Son Pinocchio: Geppetto's Musical Tale".