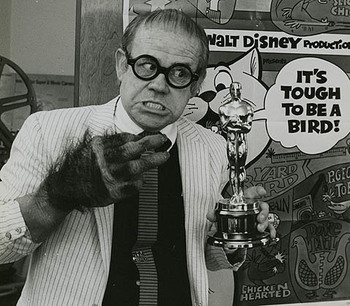 Ward Kimball is one man who works for me that I'm willing to call a genius.
— Walt Disney
Advertisement:

Initially wanting to become a painter, Kimball joined Disney in 1934 as an inbetweener, eventually working his way up to a regular animator by 1936. After working on many Silly Symphonies and Mickey Mouse shorts, he graduated to working on feature-length efforts. Because two fully-animated sequences of his in Snow White were cut, Walt gave him the task of designing and animating Jiminy Cricket in Pinocchio.

Jimmy became the first of many star characters Kimball animated and supervised, which include the crows in Dumbo, the title song in The Three Caballeros, Jaq, Gus and Lucifer in Cinderella, at least half of the characters in Alice in Wonderland, and many more.

Eventually, Kimball became a director in his own right, earning the Academy Award for Best Animated Short Film for just his second film, Toot, Whistle, Plunk and Boom. Despite the acclaim his films had gotten, Walt disliked their UPA-esque stylized animation and demoted Kimball back to animator until the mid-60’s, where he created more hilarious and experimental shorts, culminating in a second Animated Short Oscar for It's Tough to Be a Bird. He retired from Disney in 1973, but worked as an Imagineer for attractions at EPCOT in the 80’s.

Unlike most of his coworkers at the Mouse House, Kimball was just as prolific during his off-hours, working as a jazz trombonist for the Dixieland Jazz Band The Firehouse Five (Plus Two), an enthusiastic railroad engineer, historian and preservationist (with multiple fully-functioning railroads in his yard), a gag cartoonist, collector of early Americana, painter and TV host.

By far the most eccentric of the Nine Old Men, Ward’s work is noted for it’s bounciness, sharp comic timing and detailed character acting that keeps inspiring animators to this very day. If you want to get a good glimpse of Ward’s diverse output, here's a reel of his Disney animation

and then head over to the 365 Days of Ward Kimball

, initially a promotional tool for Amid Amidi's biography of the man, but stuck in Development Hell. Despite Disney putting the kibosh on the initial release, Amidi's book will be released by 2019

Directorial Efforts & Other Projects by Ward Kimball include:

Tropes Associated with Ward Kimball include: