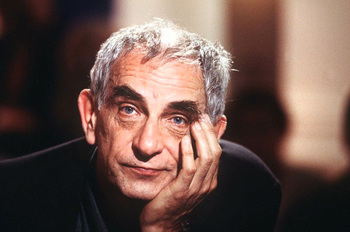 Krzysztof Kieślowski (June 27, 1941 – March 13, 1996) was a Polish film director who was considered one of Eastern Europe's greatest directors.

He originally started out making documentaries, but he soon turned his efforts to fiction film-making. His first films were politically-oriented social realist films that led to Kieślowski being considered part of the Cinema of Anxiety movement. While working on the film No End Kieślowski met the composer Zbigniew Preisner and the lawyer Krzysztof Piesiewicz. Both would become frequent collaborators with Piesiewicz coauthoring many of Kieślowski's films.

Kieślowski eventually turned to more metaphysical themes, starting with The Decalogue (also known as Dekalog), a series of short films adapted from the Ten Commandments. The series was highly acclaimed and Stanley Kubrick called it the only significant artistic event within his lifetime. Two of the films were later remade as features.

Kieślowski's final films were his Three Colors Trilogy, each based on a color of the French flag and devoted to one of the three ideals (liberty, equality, and fraternity) of the French Republic. After making these films Kieślowski retired from directing. However, he did work on three screenplays for a series of films based on The Divine Comedy, and it is suspected that he may have come out of retirement to direct these films himself if not for his early death at the age of 54. Two of the screenplays were later made into feature films.