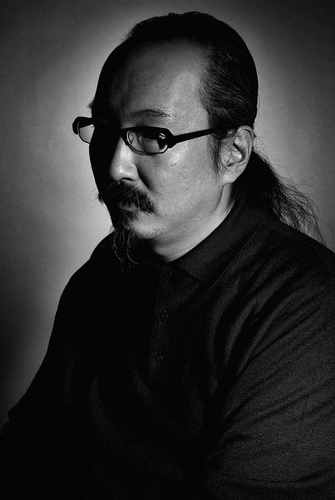 "With feelings of gratitude for all that is good in this world, I lay down my pen.
Now, if you'll pardon me, I have to go."
— Satoshi Kon closing out his final message to the world
Advertisement:

Satoshi Kon (October 12, 1963 – August 24, 2010) was a Japanese director noted for serious, thoughtful, arthouse films which examine their characters' psychology. He was especially preoccupied with the concept of subjective reality, and incorporated it into almost all of his works; that aside, his works cover a wide range of genres and themes: psychological thriller (Perfect Blue), Magical Realism (Millennium Actress), wacky caper comedy (Tokyo Godfathers) and Paranoia Agent (which defies categorisation). He was closely tied to Madhouse studios and composer Susumu Hirasawa.

Relatively unknown to most, he also drew several manga before moving into animation, many of which were eventually released in English in 2013-2015.

He passed away on August 24, 2010 from pancreatic cancer at the age of 46. His final words can be read here (in English)

or here (in Japanese)

Works by Satoshi Kon include: