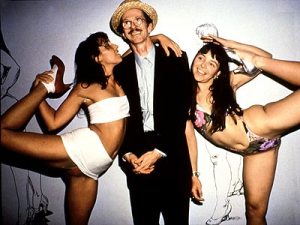 Crumb, with a pair of female fans.
Advertisement:

Robert Dennis Crumb (born August 30, 1943) is an Underground Comics creator best known for Zap Comix, "Keep on Truckin", Fritz the Cat, Mr. Natural and the album cover for Big Brother and the Holding Company's Cheap Thrills (1968). He began his career working for Topps and the American Greetings corporation; there, he drew several of the earliest Fritz the Cat comics and the graphic novel Oggie and the Beanstalk. He had some work published by Harvey Kurtzman in Help! magazine, but experiences with LSD led him to create some of his best-known comics, which he either published himself or submitted to other underground publications.

Some of this work earned him a lot of criticism from other underground cartoonists and social commentators. Works depicting Blackface-inspired imagery and use of the N-word earned Crumb false accusations of racism, even though the comics were actually a satire of racism, not racist work in of itself. Harder to deny, however, was Crumb's rampant misogyny: his comics frequently featured women being beaten up and raped, and even enjoying being sexually assaulted. Crumb commentators have associated this viewpoint with Crumb's then-unhappy marriage, noting that after remarrying and having a daughter, Crumb has drawn significantly more feminist-themed material since the 1980s.

Became famous again in the 1990s as the subject of the critically-acclaimed biopic Crumb, which is similar in many ways to American Splendor, the semi-autobiographical adaptation of the life of fellow underground cartoonist Harvey Pekar, which Crumb also contributed to. Crumb is a character in the movie adaptation of American Splendor, played by James Urbaniak. Other artists heavily influenced by Crumb include Bill Griffith, Larry Gonick, and (early) Art Spiegelman.

Crumb's earliest comics could also be considered an early example of Furry Fandom, being that he and his brother mostly enjoyed reading Funny Animal comics and drew these kinds of comics as children.

He also illustrated album covers, the most noteworthy example being Cheap Thrills (Big Brother and the Holding Company).