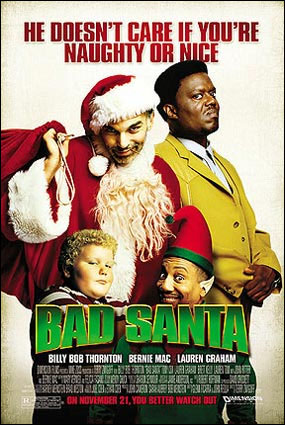 Bad Santa is a 2003 American Black Comedy film produced by The Coen Brothers (who also provided uncredited rewrites) and the Weinstein brothers and directed by Terry Zwigoff—his only financially successful movie to date.

Willie Soke (Billy Bob Thornton) is a drunk sort-of Jerkass safe cracker who along with his dwarf accomplice Marcus has a yearly routine of getting jobs as a Mall Santa and Elf respectively during the holidays and robbing the mall's safe on Christmas Eve after closing time. During one such stint, Wille meets a kid (who is mostly referred to in the movie as "The Kid") who inadvertently saves him from being raped. After a run-in with the mall's unscrupulous security chief (Bernie Mac) posing as a police officer, Willie, his girlfriend Sue and Marcus move in with The Kid, who lives alone with his senile grandmother (his mother is dead and his dad is in jail for embezzlement). Willie starts to warm up to the Kid and starts acting as a surrogate father... of sorts.

Eminem, who was a fan of this movie, included clips of this into his music video "Just Lose It" with himself playing the titular Bad Santa. A sequel called Bad Santa 2 had been released in theaters on November 23, 2016.