Comic Book / The Cartoon History of the Universe 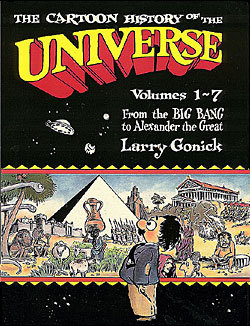 The Cartoon History of the Universe is Exactly What It Says on the Tin.

Written and drawn by Larry Gonick over thirty years, this series of non-fictional graphic novels is basically a humorous Cliff's Notes of history in comic book format. The first volume begins with the Big Bang, and subsequent volumes cover the evolution of life on Earth, the dawn of man, and into early human history. Volume 19 covers up to the Renaissance, after which the series changes its name to The Cartoon History of the Modern World. The final volume, published in 2009, reaches up to 2008.