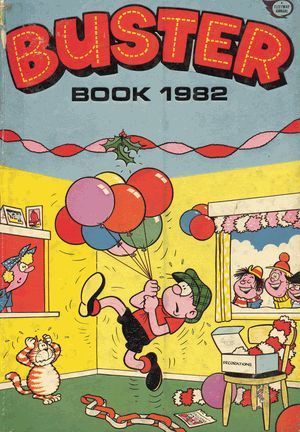 Buster was a long running British Anthology Comic. A Spin-Off of sorts of Andy Capp, with Buster, the comic's eponymous main character supposedly being Andy's son, although the two characters rarely met in the comic and never in Andy Capp's Newspaper Comic strip.

Buster ran for 40 years, starting in 1960. It merged with a great many number of comics during it's run and was the last survivor of IPC's note IPC was Buster's publisher. The publisher was also often called Fleetway which is the name of IPC's comic publishing division (they published Sonic the Comic). Near the end of Buster's run, Buster had been sold to another publisher called Egmont. humour comics.