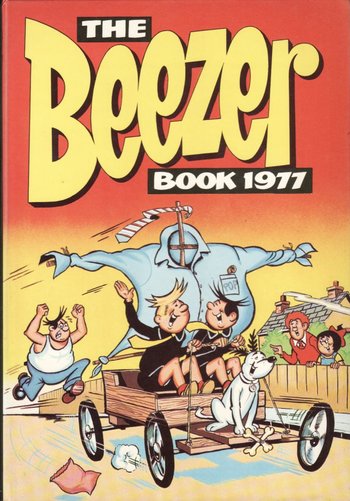 The Beezer was a British comic which first started in 1956. Originally A3 size, which was much larger than its stablemates (The Beano and The Dandy were both from the same publisher, DC Thomson), the comic ended up going A4 size in 1981.
Advertisement:

The comic merged with two comics Plugnote Plug was a comic which featured Plug from the Bash Street Kids (a strip in The Beano) as it's main star and Cracker in the 1970s and eventually merged with The Topper in 1990 to form The Beezer and Topper this combination of the two comics finally ended in 1993; however, the Beezer book (annual bumper editions) continued until the 2003 edition and the Beezer holiday special until 2002.

The comic's most popular - and longest running - creations include "The Numskulls", "Colonel Blink", "Baby Crockett", "The Badd Lads", "Ginger", "Pop, Dick and Harry" and "The Banana Bunch".