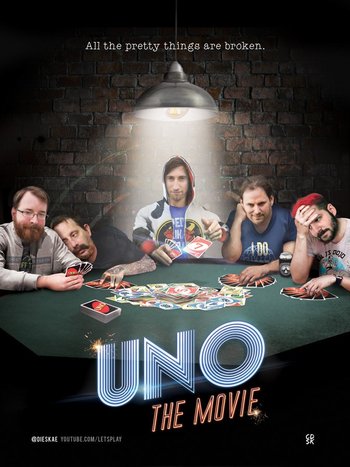 Here's looking at you, kid.
"WE ARE GOING TO DIE HERE!"
— Gavin Free
Advertisement:

is a Let's Play video by Achievement Hunter about a game of Uno for Xbox One gone horribly... horribly wrong.

It all started when, after they recorded the first 50-minute Uno Let's Play,

they decided to go again, swapping out Jack for Jeremy, turning on all the optional rules, and upping the point value needed to win to 500. The result is a two-hour-and-forty-four-minute-long epic about the downfall of five men over a card game.

Now has a fanmade trailer

and an official trailer.

and an IMDb page.

During RTX Austin 2018, it was announced that a sequel is in the works, but it would not manifest until September 9, 2022, with Uno: Infinite, where Achievement Hunter played Uno (albeit at the table with actual cards and not on consoles or computers) with some modifications and involves Audience Participation from RT First members.

No Micheals were harmed in the making of this Let's Play.