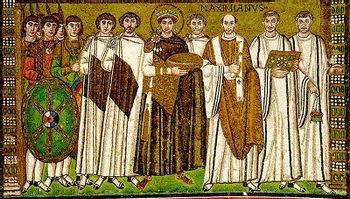 Guess who The Emperor is.
Mister Uef: Me, on a planet where they don't know who should sit down before whom? Rubbish!
<...>
Mister Bi: When the society has no color differentiation of pants, there is no purpose! And when there is no purpose...
— Kin-Dza-Dza!
Advertisement:

Often, you can tell who is in charge by the colors they wear. This can apply to royalty, nobility, military leaders, and even just the town mayor. Plus, this can apply to all of the clothes they wear or just a sash worn over a fancy suit (as long as they aren't the only one wearing it).

This largely started because certain colors were highly expensive and thus, only the most wealthy could afford them. Then the patrician class in Rome declared that the dye Tyrian Purple would be exclusively for them (at least, within Roman territory), hence the trope name. (Note that "purple" may be kind of misleading; the original dye

came in various shades and was often more reddish than a typical "purple" of today, with the most prized shade said to resemble clotted blood. Don't expect to see this reflected in TV and movie depictions of Roman patricians unless they're being very, very scrupulous with their research.)

Other expensive dyes included royal blue, vermilion (a type of bright red), or gold. And that is why, in paintings of royalty, their Royal Robes are almost always these colors. Despite this, this does not have to be the Ermine Cape Effect; Modest Royalty can use these colors to ensure people know who they are.

Thus, in fiction, who is in charge, or closely related to those in charge, can often be indicated by wearing colors distinct from everyone else.

To fit this trope:

Also, this isn't really practiced in Real Life military forces anymore, as that just paints a bulls-eye on the officers. But for that very reason, Video Games often use this trope to identify the leader of a group.