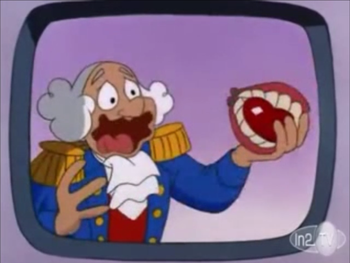 are a sign of age, poor health/dental care, or a combo thereof. As such, they are typically not a laughing matter. However, in fiction, false teeth are usually treated as hilarious and/or gross.

In many cases, old people have no problem letting you know their teeth are false, and spitting or whipping them out to show you, still dripping with saliva. It's also not uncommon for the false teeth to be left behind either, due to biting into tough food (or even non-edible objects) or the person in question just forgetting about them and leaving them behind. And that's not getting into using them as musical instruments - they make good castanets, apparently. No matter what form it takes, the bottom line is this - false teeth are funny.

Phlegmings commonly overlaps with this trope. Compare and contrast Cranium Chase, where a character getting decapitated is played for similar humor.