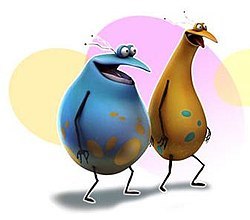 Erky Perky is an Australian-Canadian All-CGI Cartoon produced by Canada's CCI Entertainment (previously known for Eckhart and Harry and His Bucket Full of Dinosaurs) and Australia's Ambience Entertainment for Canada's YTV and Australia's Seven Network. The series was created by David Gurney, and it ran for 3 seasons with 78 episodes from 2006 to 2009.

The show stars Erquhart "Erky" Windsor (the blue one) and Percyville "Perky" Rosendahl (the yellow one), two lazy, bickering, dimwitted bugs who used to live on a hot dog cart on the streets of a big city, enjoying their idyllic life and the plentiful food scraps around them. However, one day Erky and Perky are accidentally bundled into a hotdog bag and taken home to a clean and sterile suburban kitchen with very little food scraps to eat. Now Erky and Perky must survive life in this strange new land, adapting to life with the other insect denizens of "the land of Kitchen", trying to find food in this barren and unfamiliar world, and occasionally trying to return to their former home of "Hot Dog Stand" — all with varying degrees of success.