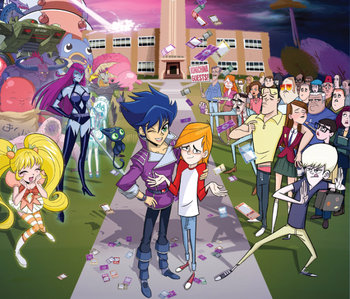 John and Max are two school friends, obsessed with a fantasy card game called Battle Day Zero, who inadvertently bring one of the game’s characters, Hiro, to life. Hiro is passed off for an exchange student at school and so his peculiarities are somewhat overlooked while John and Max figure out how to get him home. That is until the game that brought Hiro pours even more exotic creatures into the sleepy little Perth town. Life will never be the same, but then as John and Max discover, it is far more exciting this way.

Tropes that apply in general:

Tropes specific to the TV movie: