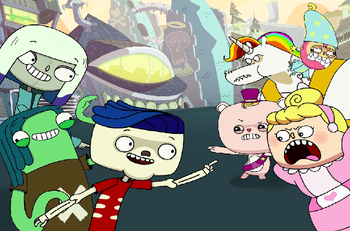 Freaktown is Canadian animated series produced by Portfolio Entertainment (previously known for Roboroach and Carl²) and created by Peter Ricq and Philippe Ivanusic-Vallee (also known for League of Super Evil and Oh No! It's An Alien Invasion). It premiered on Teletoon on June 20, 2016 and ran for a single seasons of 26 episodes, coming to an end on October 9 of that year.

The series centers around Ben Bones, a animated skeleton and goofball slacker who lives in the eponymous town, a place where monsters, mutants, and misfits of all kinds live. However, Freaktown is under control of Princess Boo-Boo the Bouncy of Sweetlandia, who want to make the place as cute and cuddly as the rest of her kingdom with the help of Lord Cuddles the Fluffy, a teddy bear appointed as the mayor of Freaktown by Boo-Boo. Unfortunately for the Sweets (but fortunately for the Freaks), Ben is always throwing a wrench into their plans in his quest for fun and thrills along with his pals Lenny, a slow-witted giant mantis with ever-reliable "buttsilk" who is Ben's roommate, and Priscilla, a potion-brewing ghoul who works at a convenience store and is able to take her eyes from her sockets.