Fly in the Soup 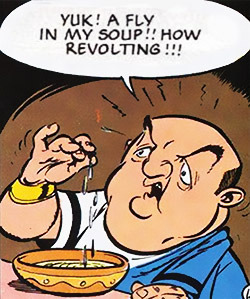 "The maître'd I pursued. 'Flies in the soup are an issue. They were not on the menu.' Skip to the loo, my darling."
— Skip to the Loo

A Stock Joke involving a recipient at a restaurant having a bowl of soup, only for him to call out to the waiter that there's a fly in his soup. Sometimes the customer is just trying to scam the restaurant into giving him a free meal — and other times he really did find a fly in there. The joke has many variations, the most famous one being:

Customer: Waiter, what is this fly doing in my soup?
Waiter: The backstroke.

The joke can sometimes be parodied, as instead of an actual housefly, there can also be a Visual Pun in the soup... a zipper,note the fly of a pair of pants a baseball,note a pop fly etc.

during the 1920s, when comedians who frequented the place poked fun at the rudeness of the waiters.

A character complains about flies in his soup... but the waiter assumes he wants more and claims they add to his revenue.

A character complains about flies in his soup... but the waiter assumes he wants more and claims they add to his revenue.