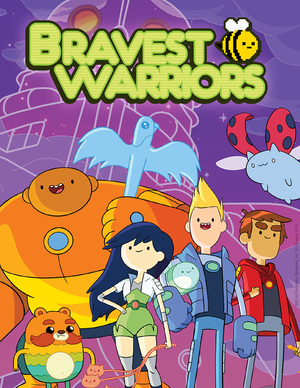 Bravest Warriors is an animated web series based on the other Random! Cartoons short from Pendleton Ward, creator of Adventure Time. The show is about four 16 year-olds — Chris, Beth, Danny, and Wallow — who journey across the universe in the far future, saving alien worlds with the power of their emotions. The series premiered on November 8, 2012.

Originally produced for Frederator Studios' Cartoon Hangover YouTube channel, Ward had no involvement with the show outside some minor voice roles, despite creating the original short. Instead, the series was executive produced by Will McRobb and Chris Viscardi, while Breehn Burns (of Dr. Tran fame) wrote and directed every episode of the first two seasons (sans one). The third season, produced for the Cartoon Hangover VRV channel, was directed by Tom King (no, not that one), with Burns remaining as writer.

A television series, which serves as both the fourth season and a continuation of the web series, premiered December 25, 2017 on VRV and aired on Teletoon on September 3, 2018. The television series is a Canadian co-production with Nelvana and boasting a new creative team. On December 3, 2019, it was revealed that a Spin-Off show focusing on the character Catbug is in development.

There is a comic book series from KaBOOM! Comics, which ran for 36 issues (plus one annual issue, an Impossibear Special, a Paralyzed Horse Special and a Tales from the Holo-John special). The comics tended to be more family-friendly than the series. There's also some children's books: The Great Core Caper (a Gamebook), Strange Dog in a Strange Land, and some activity books.

The production blog is here

, and you can view the original short here

. And the wiki for it is right here

. You can watch Season 1 here

. The comic series can be purchased here

Both Chris and Plum play a game of Merewif Tag, where they swap each other's bodies for the day.

Both Chris and Plum play a game of Merewif Tag, where they swap each other's bodies for the day.