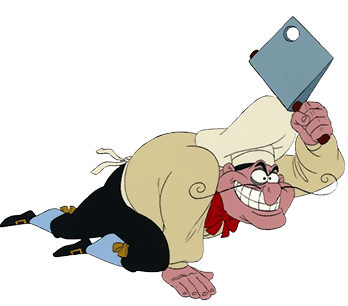 "My meals are to die for!"
"Like a gladiator about to meet his fate
I enter my arena, bow my head, and start to bake."
— The Aquabats!, "The Baker!"
Advertisement:

A certain stock kind of villain, the Evil Chef is just that. They're cooks who are deliberately evil. It doesn't matter how exactly they're trying to achieve that goal, just that their primary role is as a chef or cook. They may or may not be using their cooking skills to attempt to defeat the heroes; they may just have the chef characteristics as something completely unconnected to their evil plans. They usually come in one of two types: the French chef type with a very pointy mustache, and the 'school canteen chef'.

Not to be confused with Lethal Chef, as characters listed on that page are not always evil. Nor are the characters listed here always actually bad at cooking. This is for evil/killer cooks who cause death and destruction, often by their cooking (and deliberately) while Lethal Chef is for people who cannot cook that often accidentally cause various effects because of how bad their cooking is. Chefs make great villains because they work with lots of different types of big knives and various things easily converted to weapons (frying pans, rolling pins, meat tenderizers...).

Also has about a 50% chance of being a case of The Pirates Who Don't Do Anything, in that many of these characters may not actually be shown to cook in the story. In stories in which the main characters are animals, they of course run the risk of being cooked up or being trapped for stealing food; in this case the Evil Chef is less nastily evil, since he's just doing his job, but is still very threatening.

May overlap with the Chef of Iron, if the Evil Chef fights his or her enemies using cooking implements as weapons or suchlike. May also overlap with Mad Artist if you consider cooking an art form, and especially if the character's goal is to make the best food possible through any means. An Evil Chef who specializes in preparing meat may be depicted as Cruella to Animals. Also see I Ate WHAT?!, The Secret of Long Pork Pies, and Stab the Salad. Most rivals in a Cooking Duel are merely an Opposing Sports Team, who may not even be negatively characterized; but there can obviously be an incentive to make such a character into an actually evil enemy. Compare Angry Chef, which this trope may also overlap with. Contrast Sweet Baker.

The killer is a butcher who uses meat from live human children.

The killer is a butcher who uses meat from live human children.