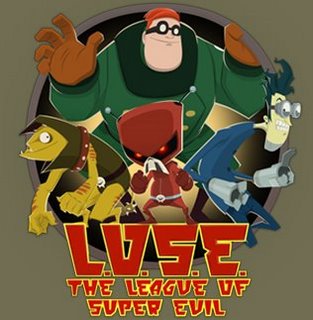 League of Super Evilnote sometimes called The League of Super Evil (acronym L.O.S.E.) is a Canadian All-CGI Cartoon created by Nerd Corps Entertainment. A parody of the superhero genre, it differentiates itself from the studio's previous works by being a straightforward comedy instead of an action-driven series with a lot of humor, using Nerd Corps' distinct style of CGI to pull off zany slapstick gags and other physical animation tropes rarely associated with comedic 3D cartoons. Also unlike Nerd Corps' previous works, it was the brainchild of Peter Ricq and Philippe Ivanusic-Vallee, with Asaph Fipke (creator of Nerd Corps' other shows and founder of the studio) instead only developing their concept for television.

The show about a Quirky Miniboss Squad made up of an inept Comic Trio of Ineffectual Sympathetic Villains. The team is led by the diminutive Pointy-Haired Boss Voltar, a proudly Card-Carrying Villain and all-around Large Ham who believes himself to be the world's greatest supervillain, but is largely incapable of doing anything more serious than Poke the Poodle deeds. Forming Voltar's posse of henchmen is the Mad Scientist and luckless pain magnet Doktor Frogg and Dumb Muscle Red Menace (who is anything but a menace). Their Team Pet is Doomageddon, a pandimensional "doomhound" and Extreme Omnivore able to change size, turn invisible, and teleport in a flash of fire.

Every episode they pull some harebrained scheme in an attempt to be evil, but usually manage only to be annoying. So far their most ambitious schemes have been to annoy the neighborhood, steal $5 to open a bank account for a free toaster, host a neighborhood barbecue and not invite the neighbors, and sneak their way into a fancy restaurant. They have also sold Evil Lemonade and Evil Pinatas, and stolen an ice ray that can turn the planet into an ice cube, but only to use it as an air conditioner.

The show premiered in 2009 on YTV and finished its run in 2012, lasting 3 seasons and 52 episodes. Outside of Canada, it also aired on Cartoon Network in the States as one of several Canadian imports prominent on the channel's airwaves at the time (the second series after previous Nerd Corps creation Storm Hawks to be from YTV instead of Teletoon). However, only the show's first season aired on that channel before the series vanished from American airwaves.