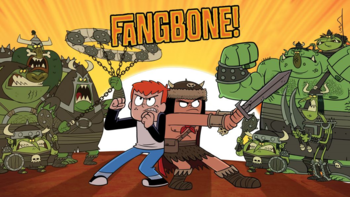 Skullbania's in mania; they fight to keep their rule
Of the evil magic big toe of the Venomous Drool
One barbarian entrusted with the crusty toe of fate
Portal blasted to our planet, but can he keep us safe?!
—The first lines of the show's theme song
Advertisement:

Fangbone! is the Animated Adaptation of bestselling children's author Michael Rex's hit graphic novel series Fangbone! Third Grade Barbarian, produced by Canadian studio Radical Sheep Productions (the creators of The Big Comfy Couch). The show was developed for television by Simon Racioppa and Richard Elliott (who had previously done the same for Grossology, and had also created Spliced), although uniquely for a cartoon of its type, Michael Rex was heavily involved in its production as an executive producer and concept artist.

The series centers around the eponymous Fangbone, a nine-year-old Barbarian Hero from Another Dimension known as Skullbania, a Sword and Sorcery fantasy world home to countless Barbarian Tribes that have fought against the forces of the Evil Sorcerer Venomous Drool for over a thousand years. Drool seeks to take over all of Skullbania, but fortunately, his incredible power is severely diminished by the fact that he is missing the primary source of his vile magic — his Big Toe of Evil, which is under the guardianship of Fangbone's own tribe, the Mighty Lizard Clan. To prevent Drool and his minions from acquiring the Toe and thus the power that Drool needs to conquer Skullbania, Fangbone has been entrusted with the title of Toe-Keeper and sent by the tribe's wizard Twinkle-Stick to Earth, where Drool will be unable to follow.

On Earth, a chance encounter during Fangbone's first hours in the new world leads to him befriending Bill Goodwin, an ordinary boy of his age who attends Eastwood Elementary. Bill helps Fangbone with adjusting to life on this strange and unfamiliar world and assists him in battling the various monsters that Venomous Drool sends out from Skullbania to take the Toe back, as well as other Skullbanian inhabitants that seek out the Toe for their own purposes. What follows is a mixture of action, adventure, and hilarity as Fangbone learns much about both Earth and Skullbania all while battling the forces of evil, trying to adapt to life as an elementary school student, and developing his newfound friendship with Bill.

The show's pilot "Warbrute of Friendship" was originally aired in 2014 on the Canadian version of Disney XD to warm reception (including multiple awards). Unfortunately, due to some major shifts in Canadian kids' TV, the show's release was delayed to 2016, and it instead debuted on Family CHRGD (now WildBrainTV). The show did air on Disney XD outside of Canada however, although its poor treatment in the United States resulted in the series running for only a single season of 26 episodes and ending on a cliffhanger.

In this scene from the show's first episode, we are introduced to Bill and Fangbone's third-grade teacher Ms. Gillian, who would rather be teaching any classroom than the madhouse she deals with five days a week.

In this scene from the show's first episode, we are introduced to Bill and Fangbone's third-grade teacher Ms. Gillian, who would rather be teaching any classroom than the madhouse she deals with five days a week.