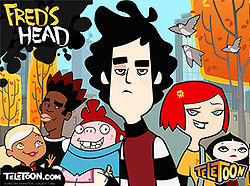 Fred's Head (Blaise le Blasé, or Blaise the Jaded, in its original French) is a Franco-Canadian Adobe Flash-animated show created by Benoît Godbout and Malorie Nault-Cousineau. The show was made for Teletoon and France 2 by the Quebec-based Canadian animation studio Spectra Animation (Toopy and Binoo, Kid Paddle) and the French studio Galaxy 7 (with most of the production taking place in Canada).

The show follows Fred LeBlanc (Blaise LeBlanc in French), a cynical and apathetic 15-year-old Deadpan Snarker from Montreal who finds himself with serious reservations about adult life and its trials. Uncertain and unenthusiastic about life and his personal goals, Fred finds himself pulled in many different directions by the eccentric people around him as he navigates the tribulations of adolescence. Sometimes, he finds his best friends, Fabienne Ledger (Fabienne Lajoe in French) and Gregory Gilbert "GG" Pyrowski (Gean-Gilbert Pirowski in French), dragging him into weird adventures; other times, he finds his overly-doting parents driving him nuts with their sunshine-and-rainbows attitude to life; and still other times, he runs into the resident cheerleader and her jock boyfriend trying to teach him to see the bright side of life. But whether he's dealing with bumps in longtime friendships and getting gruelling summer jobs or trying to impress the girl of his dreams, Anette, and putting up with the school psychologist's obsession with him, Fred finds that everyday problems in his not-so-normal life can be as challenging as they are enlightening for a moody young man on the cusp of entering adulthood like him.

One of the very few Canadian cartoons to have been produced in French first for a Quebec-based audience before then being adapted for the Anglophone market, Fred's Head is also noteworthy for being one of the very few cartoons specifically aimed at teenagers rather than children or adults. As a result, it doesn't shy away from directly depicting certain issues specific to teenagers, such as alcohol or cheating, but never ventures Very Special Episode territory despite that. There is also some light cursing and a few allusions to sexual situations in the series, making it much more mature than many similarly teen-oriented cartoons or even kids' shows that have gained strong appeal with teens and young adults. While some of this can be pinned on what Canadian kids' TV deems acceptable compared to the US, Fred's Head still stands out in how one could be forgiven for mistaking it for an adult cartoon when compared to other Canadian cartoons made for the same demographic.

The show made its debut in October 2007 on the French-language version of Teletoon, arriving in Anglophone Canada a bit later in January 2008. The final episodes of the show aired in July 2008, concluding the series run at 26 episodes over a single season. Reruns of the series however continue to be a thing in Francophone Canadian television, and France has also received a complete DVD release of the series in its original French language.