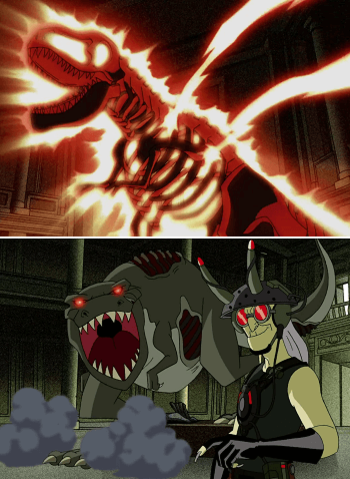 Zombie T-Rex is all the rage these days.
Mr. Stone: This device can take a fossil and extract genetic data from it, and clone a copy of the ancient Pokémon!
Ruby: Eeeeee that is so cool how do you make them from just data how do you know what to feed them ARE THEY REALLY DINOSAURS?!
— Boldores And Boomsticks
Advertisement:

So there's some creature long extinct, but there are fossils of it. Well, to twist an old saying, where there's a fossil, there's a way...a way to bring it Back from the Dead with a dose of Applied Phlebotinum.

Realistically, an actual fossil is nothing more than lithified remains, and little if any actual genetic material will have survived (if we're dealing with a straight-up Necromancer however, then the problem instead is that the process of lithification gradually replaces the bones with bone-shaped rocks over time). note Not to mention that most fossil displays are actually just plaster replicas with wire supports. Sometimes the writers attempt to bypass this, by having said remains preserved in ice or amber. While this wouldn't work for most prehistoric animals due to DNA decaying over time, it's more plausible to the audience, so it gets a pass. Of course, when dealing with more fantastic ways of bringing fossils to life (such as the aforementioned necromancy), these objections don't really matter.

This one fits squarely under Artistic License – Biology. If the fossil is simply reanimated, that also counts as necromancy.

Sub-Trope to Not So Extinct. Compare and contrast Undead Fossils, where the revived animal is technically still dead.

Sartana uses her necromancy to animate a few dinosaur skeletons.

Sartana uses her necromancy to animate a few dinosaur skeletons.