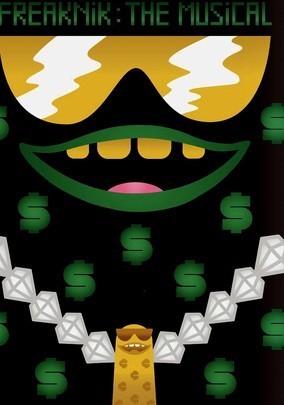 I'M BAAAAAAAAAAAAAAAAACK!
This hourlong animated special aired in March 2010 on Adult Swim based on the real life spring break event that was once hosted in Atlanta, Georgia

The special tells the story of the spirit of Freaknik coming back to host the seemingly long-forgotten event that hasn't been done since the 1990s; the whole world rushes to it to join in. Among the participants is a struggling rapper crew who call themselves the Sweet Tea Mob, hoping to make a name for themselves during the event's "Battle of the Trillest". However, an Illuminati group of respected black celebrities known as "The Boule" tries to put a stop to the festivities before they get out of hand.

Notable for featuring an All-Star Cast of rappers, musicians and comedians.