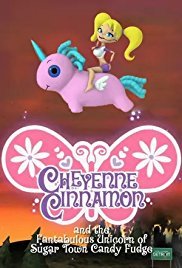 Said show was planned to focus on a pop singer named Cheyenne Cinnamon (voiced by Neko Case) who, behind her wholesome public image, was really a drug addict who really got around and had magical powers. Using these powers, Cheyenne would encounter various real world issues in the city of Detroit, including teen pregnancy and racism.

While the show was not picked up after the pilot episode, that one episode was later released as part of an Adult Swim compilation DVD. Several references to this show also appear in Squid Billies.