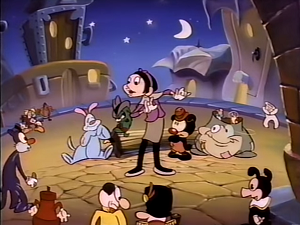 "Tattertown is a strange world. What I wanted to do was make something where old and new animation could clash head on, visually, stylistically, and in attitude. Tattertown is where old cartoon characters live side by side with new cartoon characters, and they have a hell of a time relating. The old characters go all the way back to Paul Terry’s Farmer Alfalfa. Oswald the Rabbit is there and Bosko. And they’re right up against characters who are modern and can’t move very well and have superior attitudes."
—Ralph Bakshi, in an interview with Animato! magazine in 1988.
Advertisement:

A Christmas special created and directed by Ralph Bakshi which aired on Nickelodeon in 1988. It's loosely based on a comic strip Bakshi had created in his youth called "Junktown", and was originally the pilot to a series that never materialized.