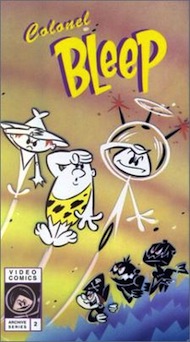 From left to right: Squeek, Scratch and Colonel Bleep fly as Black Patch, The Black Knight of Pluto and Bruto the Black Robot watch on.
And now stand by for adventure!
Advertisement:

Colonel Bleep was the first color cartoon ever made for television, created by Fran Noack and written by Robert D. Buchanan. note (Some sources claim Joseph Barbera had a hand in its initial creation before founding Hanna-Barbera with William Hanna.) It features the titular Colonel, an extraterrestrial from Futura, protecting and serving Earth with the aid of his two cadets, Squeek and Scratch (a cowboy puppet and a caveman, respectively). They often meet opposition from Doctor Destructo or other villains.

The show was originally syndicated in 1957 as a segment on Uncle Bill's TV Club. 104 episodes were produced, but only 44 are known to survive today.