The Fantastic Trope of Wonderous Titles 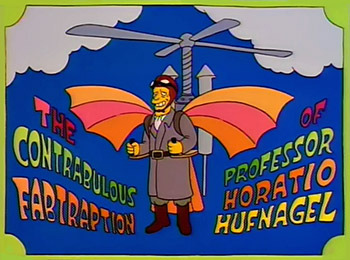 There's a tendency in media to create very long titles full of rare (or fake) multisyllabic words that paint a picture of whimsy, fun, and adventure, especially when the work is set in the past. This is almost a Dead Unicorn Trope as most of the titles are homages to works that never existed at all. It's often associated with pseudo-Victorian throwbacks and Steampunk.

Not to be confused with Character Name and the Noun Phrase, though they may overlap (either by reversing positions in the title or replacing "and the" with an apostrophe-S). A sub-trope of Long Title and The X of Y, and may take the form of The Noun Who Verbed. See also The Adjectival Superhero and In Which a Trope Is Described.