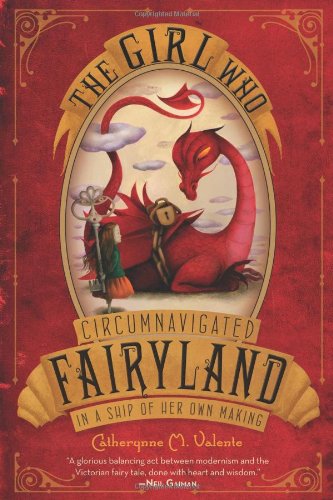 "Once upon a time, a girl named September grew very tired indeed of her parents' house."
Advertisement:

September, terribly bored of her mundane life in Omaha, is delighted when she's visited by the Green Wind and the Leopard of Little Breezes, who spirit her away to Fairyland. There, she takes on a quest for a witch to take her magical spoon back from the terrible Marquess, ruler of Fairyland. She gains great friends and allies in A-Through-L (a half-wyvern, half-library crossbreed), a blue marid named Saturday, and many other residents of the land, both friendly and dangerous.

The Girl Who Circumnavigated Fairyland in a Ship of Her Own Making is a children's and young adult fantasy novel by Catherynne M. Valente, with illustrations by Ana Juan. The novel started as a book within a book in Palimpsest. It was originally published for free online, but was finally put onto paper in May 2011. It deals with the adventures a young girl called September has in Fairyland. That Sounds Familiar, but the book provides a broad knowledge on folklore, and reads like a love letter to those odd Victorian classics with a twist of sardonic humor to them (such as Alice in Wonderland).

The book spawned a series, totaling six books. A sequel called The Girl Who Fell Beneath Fairyland and Led the Revels There was published in October 2012. A second sequel The Girl Who Soared Over Fairyland and Cut the Moon in Two was published in October 2013, and a third, The Boy Who Lost Fairyland, in March of 2015. A prequel, The Girl Who Ruled Fairyland—For a Little While, tells the story of the young girl who became Fairyland's Queen Mallow (and is full of Major Spoilers for the first book, so only read it after that one). The final book, The Girl Who Raced Fairyland All The Way Home, was released in March 2016.

The Fairyland books contains examples of: