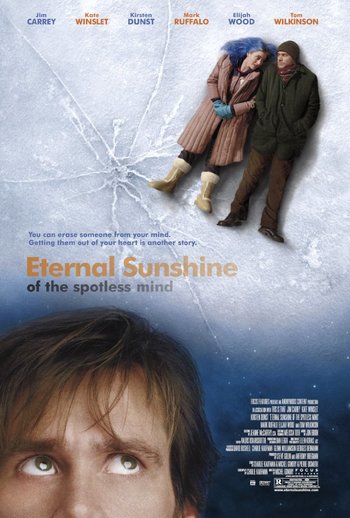 You can erase someone from your mind. Getting them out of your heart is another story.
"How happy is the blameless vestal's lot!
The world forgetting, by the world forgot.
Eternal sunshine of the spotless mind!
Each prayer accepted, and each wish resigned."
— Alexander Pope, "Eloisa to Abelard", as quoted by Mary Svevo.
Advertisement:

Eternal Sunshine of the Spotless Mind is a 2004 science-fiction drama/comedy, directed by Michel Gondry, written by Charlie Kaufman and starring Jim Carrey in one of his more serious roles.

After his declining relationship ends in a serious argument, Joel Barish (Carrey) decides to make up with his now ex-girlfriend Clementine Kruczynski (Kate Winslet). Finding she's changed her number, he desperately follows her to work and, when she treats him like an average customer, he soon learns she dealt with the heartbreak by undergoing a memory wiping procedure. Since Clem has cut him out of her life altogether, Joel meets with the erasing company and opts to undergo the same procedure in an act of spite.

What follows is a rather surreal journey through his memories, with Joel re-experiencing their entire relationship in a reversed order as erasing company Lacuna Inc. backtracks through his memories to wipe them away in an interwoven, current time B-plot. Of course, once Joel becomes consciously aware that he's reliving his fading memories (and those most recent bad memories are fading...), it doesn't take long for him to realize why he fell in love with Clementine in the first place, making him realize he'd rather not forget his connection even as he moves inexorably backwards through his memories towards erasing it completely...

The film does have some notable similarities to "Hearts Do Not in Eyes Shine," a short story by John Kessel published in 1983; the said story centers around a couple who had their memories partially erased and follows a similar story progression.