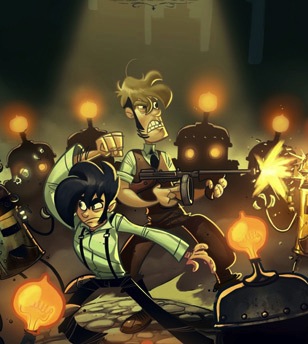 Four Gods wait on the windowsill
Where once eight Gods did war and will,
And if the gods themselves may die,
What does that say for you and I?
— The Quartet For The Dusk Of Man, first verse
Tycho Ephemerous Brahe
Advertisement:

Penny Arcade Adventures is an episodic video game series based on the Penny Arcade web-comic series.

Hothead Games released the first two episodes of On The Rain-Slick Precipice Of Darkness. This adventure features familiar characters from Penny Arcade transplanted into 1920s America, battling the dark forces of evil gods and those who would use their power for evil.

The series was supposed to be a tetralogy, but ultimately Hothead Games abandoned the plans for the third episode to pursue other products

. Supposedly Hothead Studios said that the games weren't profitable enough to continue the series and that a third episode would be only be made if the first two sold enough copies. This, combined with the studio's focus on DeathSpank , caused the Penny Arcade guys to nix the idea, though both parties declined to elaborate on the falling out. A brief kerfuffle ensued when, after a large spike of sales upon the game's debut in the Mac Store, Hot Head tweeted that a third game would be made if 100,000 sales were made, something that the Penny Arcade creators immediately denied. The tweet was quickly deleted. After a while, Jerry Holkins ("Tycho," writer of both the game and the webcomic) decided to continue the series in prose form

, giving the fans a taste of what the third episode's story would have been like.

That seemed like the end of it until the Penny Arcade team contracted with Zeboyd Games, the developer behind Breath of Death VII and Cthulhu Saves the World, to produce Episode 3 as a 16-bit-styled RPG. This game was released on June 25, 2012 on Steam and June 29, 2012 for Xbox Live Indie Games. Ports for the Mac, iOS, and Android were released on October 25, 2012. With them came the Lair of the Seamstress DLC, a challenging dungeon for overachievers that unlocks once the player has maxed out their Class Pins in the main game. The second DLC, The Beginning of the End, was released on December 21, 2012, and elaborates on the fate of "Rake Guy" (the player character from the first two games). The fourth and final episode of Precipice was released on June 7, 2013.

...and, of course, anything you can think of on the Penny Arcade page, as the games use their writing and art style.