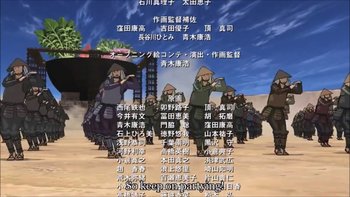 So keep on partying!
Advertisement:

So your favorite show just ended, and you beat the final boss of that game that's kept you busy for weeks. What better way to kick off the credits sequence than watching the hapless enemies the hero mowed down do the jitterbug for your entertainment?

The Dancing Mook Credits sequence is very self-explanatory: a group of commonly found enemies in a show or game start dancing at some point during the credits roll, be it in or out of character for them. Most often played for laughs. Mascot Mooks are especially prone to doing this.