Dancing on a Bus 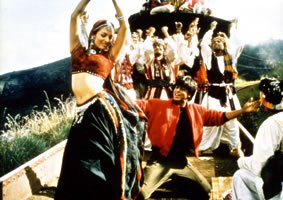 A song sequence that frequently appears in Bollywood films. Inspired by his beautiful surroundings, or by a beautiful love interest, the character sings a rousing anthem to demonstrate either his patriotism or his love, while defying the laws of gravity.

The vehicle needn't be a bus; it could be on any vehicle. Trains are just as likely.

Has nothing to do with missing cast members.