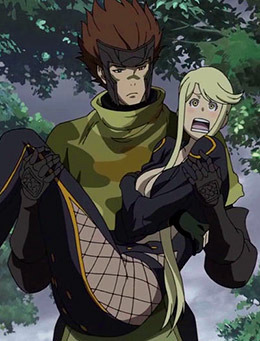 A cross between Unwanted Rescue and Save the Villain centering around The Rival or Worthy Opponent being bailed out of surefire death by the hero.

Does the rival or opponent thank the hero for saving them when he didn't have to? Rarely. They instead insist that they could have escaped by themselves, and would have, if he hadn't swooped in and tried to play...well, the hero. Admitting that they owe him one would be a great blow to their ego (though the resistance is understandable if the hero immediately gloats about the rescue, or rudely demands that the saved show their gratitude before they have a chance to do so on their own). At the very best, a patently insincere word of gratitude may be expressed before their speedy departure.

If he's a true All-Loving Hero, he'll shrug it off. If he's not, expect a "why did I even bother saving you" rant to ensue. Or at least, a bitter Think Nothing of It.

Compare Entitled Bastard, where the beneficiary has no sense of gratitude whatsoever and may even complain about minor inconveniences associated with the rescue (the two may overlap if the hero is annoyed enough to deliberately embarrass the jerk he's duty-bound to save) and Ungrateful Bastard, where the beneficiary actually attacks the rescuer over something related to the rescue. Contrast Grudging "Thank You", where however much he resents it, the rescued acknowledges that gratitude is due.

See Enemy Mine for the reasoning behind the Embarrassing Rescue. Not to be confused with Complaining About Rescues They Don't Like.