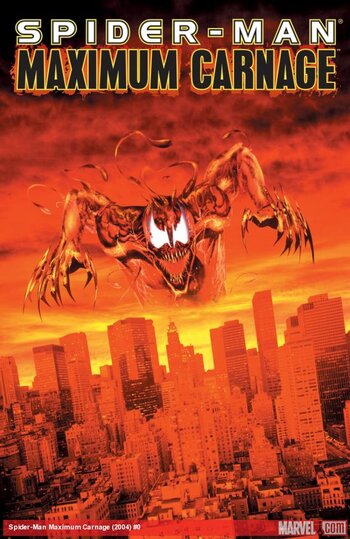 Maximum Carnage was a 14-part comic book crossover event in 1993. The story spanned every Spider-Man title released that summer, three issues apiece of The Amazing Spider-Man, The Spectacular Spider-Man, Web of Spider-Man, and Spider-Man, plus the first two issues of the new title Spider-Man Unlimited that bookended the story.

When demi-alien supervillain Carnage escapes from incarceration and gathers a cadre of similarly murderous superpowered followers, the motley crew go on rampage through New York City, sparking mass rioting and mob violence. Spider-Man teams up with a voluminous number of guest stars (including one-time foe Venom) to stem the tide of violence and recapture Carnage.

At its best, the story is a Silver Age self-critique, forcing Spidey to face an implacable killer who — as the prologue establishes — is irredeemably evil and can no longer be stripped of his alien symbiont. Coincidentally, it also served as a push for Venom, who butts heads with Peter over whether to bring Carnage in dead or alive, and the villain consequently eludes their grasp several times.

It was later adapted into a surprisingly popular beat 'em up game for the Sega Genesis and Super NES, published by LJN. The game allowed players to control either Spider-Man or Venom, and featured the rest of the hero cast as summonable power-ups. A surprising amount of attention was paid to accurately recreating the comic, including levels modeled after scenes from individual issues, and villains' vulnerabilities or resistances to certain attacks.

In addition to the game, the event later went on to inspire a haunted house attraction at Universal's Halloween Horror Nights in 2002 also titled Maximum Carnage. The house, while not a direct adaptation of the comic, similarly had a plot where Carnage assembled a team of villains and waged war against Spider-Man and the other heroes; the biggest difference being that this time things didn't turn out so well for the heroes.