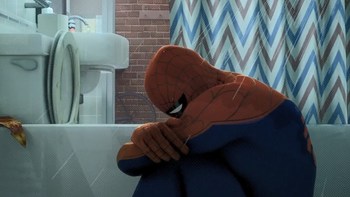 "I broke my back, a drone flew into my face, I buried Aunt May, my wife and I split up; but I handled it like a champion!"
"So many long hours spent around sick people, and I got numb to it, I stopped caring. Do you know how many hours I've spent awake at night, wishing my powers would just go away, or that some circumstance would come up where I'd make some excusable mistake where they would eventually forgive me, but where I couldn't visit the hospitals anymore?"
— Panacea, Worm
Advertisement:

This is a trope where The Hero, suffering from (or enjoying, depending on the mood of the story) Chronic Hero Syndrome, spends so much of his time and effort helping people, that it is physically and emotionally wearing him down to the breaking point. It can be even worse for him if he has something akin to super hearing or Telepathy, so he can always hear people calling for help, even when he's trying to get an hour or two of sleep before clocking in for his Stock Super Hero Day Job and chugging coffee for the entire day.

This may lead sooner or later to Passing the Torch and Retired Badass, or in more cynical works, a Heroic BSoD or a Despair Event Horizon, as the increasingly strung-out and hopeless hero just loses it because he can't save all those people who need him. This could of course apply to the villain, for many of the same reasons (well, presumably not the strain of constantly having to save people, but certainly the stresses of dealing with the superheros and law enforcement would be an issue). For the physical counterpart, where the mind is willing but the body is failing, see Feeling Their Age. If the hero snaps out of their fatigue and ends up saving the day, then it's Achilles in His Tent.