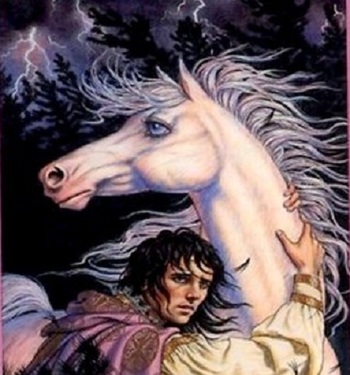 A prequel of sorts to many of Mercedes Lackey's Heralds of Valdemar novels, The Last Herald-Mage is a trilogy that gives the "real story" of title character Vanyel Ashkevron.

When the trilogy begins (in Magic's Pawn), Vanyel is a vain, somewhat petty fifteen-year-old with no manifested powers, sexual confusion, a simpering, weak-willed mother, and an abusive, prejudiced father who lets a brutish weapons master break Vanyel's arm in an attempt to "teach him to be a man". Although Vanyel's only real passion is for music, his father orders him to go to Haven to be fostered by his much-feared Aunt Savil, a Herald of Valdemar. Initially miserable in Haven, Vanyel finds happiness as he becomes aware of his gay identity, studies an appropriate style of combat, and falls in love with Savil's trainee Tylendel.

Unfortunately, his unquestioning devotion to Tylendel causes tragedy when he helps the trainee, now grieving over his brother's death, to obtain a book of dark spells: not only does Tylendel use forbidden magic, murder several innocent people, and ultimately commit suicide out of guilt, but a massive flood of mystical energy unnaturally opens multiple magical channels into Vanyel.

The remainder of Magic's Pawn concerns Vanyel's acceptance of his newfound responsibilities as a powerful Herald-Mage; in Magic's Promise, he tries to solve a mystery in another country while dealing with excruciating loneliness; and in Magic's Price, now famous, infamous, and exhausted, he finds new old love just before he has to face down a mage with the power to destroy Valdemar.