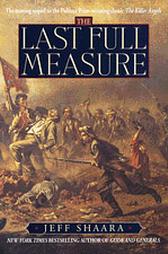 The Last Full Measure is the third book in Shaara Civil War trilogy, preceded by Gods and Generals and The Killer Angels, depicting events in the Eastern Theater of The American Civil War. It was published in 1998. Although there were plans to adapt it into film like its predecessors, they were scrapped after the poor box office showing of Gods and Generals.
Advertisement:

The title is derived from a line in Lincoln's Gettysburg Address: "that from these honored dead we take increased devotion to that cause for which they here gave the last full measure of devotion." The speech itself is printed, one section at a time, in the novel's section breaks.

It starts almost immediately after the conclusion of the Battle of Gettysburg and covers the war from that point until the surrender at Appomattox Courthouse. The book introduces General Ulysses S. Grant when he is appointed Lieutenant General in Washington, D.C. and takes over command of the Army of the Potomac from General Meade, implementing a strategy of not retreating from a numerically inferior force and pursuing them after victories. Meanwhile, Lee has lost his best commanders, his army is underfed and ill-supplied, and he is left with fewer and fewer options until he is only left with surrender. The novel concludes with the last days of its surviving protagonists postbellum.

Not to be confused with the nonfiction book of the same tile by Richard Moe, which follows the lives and times of the First Minnesota Volunteers as they fought for the Union in the Civil War.