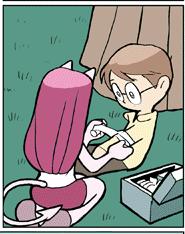 In which a succubus girlfriend proves to be a good nurse, too.
Belle: Well, you should learn to control your temper. Now, hold still. This might sting a little.
[presses cloth to wound; the Beast growls in pain]
Belle: By the way, thank you for saving my life.
Beast: [stops growling] ...You're welcome.
— Beauty and the Beast
Advertisement:

Jack suffered some minor injuries. All he needs is to have the scraps and cuts cleaned and bandaged — maybe some antiseptic, or a few stitches, or a bandage. Fortunately, danger is no longer looming, and here comes Jill to do it; she is usually not The Medic (though she can be), the injuries not being severe enough to require professional attention.

Like Post-Victory Collapse, if The Cavalry Arrives Late, this can keep Jack out of the way while they clean up all the loose ends.

Unlike the After-Action Healing Drama (for serious wounds), it is a quiet moment after the battle or The Chase or whatever way he had suffered the injuries. Therefore, even though he is not suffering Post-Victory Collapse, he will often react more strongly to the pain than during the thick of things — with the humanizing effect of Afraid of Needles. In the antiseptic variation, using iodine will get a particularly strong reaction.

Jill often has to tell him to hold still when she treats the injuries — often with a warning, in advance, that it will hurt. If she doesn't sympathize with him — either in general or because she disapproves of how he got injured — she may briskly inform him not to be a baby. She may try to soothe him if she does feel sympathetic, particularly if they are still in enemy territory, and he needs to keep quiet. Expect a Bandage Wince or two.

Regardless of how she feels about him, she may inform him that it was really stupid to get into trouble in the first place, which may or may not be followed by an acknowledgement of his courage or even the Smooch of Victory. Criticism is less likely if it was on her behalf, where appropriate gratitude may be expressed. She may, however, deny that his intervention was needed; that sometimes is true.

It also affords time for a tender moment after an action-packed scene (not to mention a Shirtless Scene), or merely for people to talk about discoveries made during the heat of battle. The first is usually a man getting patched up by a woman; it often advances the Florence Nightingale Effect, but seldom goes all the way from nothing to love because it's only one scene. If not, or if there is no Unresolved Sexual Tension, it's commonly used for exposition, since they can talk. Or, of course, both, particularly if this gives a chance for the Scar Survey. It can also be a Pet the Dog moment to show one character cares what happens to the other — especially convenient for The Stoic since it does not require him to evince any emotion.

When there is no one around to help, Self-Surgery may come into play. It tends to be far less pleasant. If she doesn't have a bandage handy, the subtrope From Dress to Dressing applies.