Webcomic / City Under The Hill 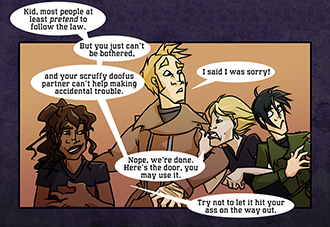 The main cast, proving that even the Desk Jockeys have their daily limits when it comes to forgery.
"I'm gonna let you in on a secret. Magic is real.
You're not supposed to know. No-one is.
Nobody knows the power of a secret better than the underfolk do.
All the ghoulies and ghosties your grandmother warned you about...
They live down here, in the City Under the Hill

It's a well known fact that people with magic tend to try to hide it and themselves. So a long time ago, when everyone else started mapping places and Here There Be Dragons became a thing of the past, they needed somewhere new to hide. Step in seven sages who created their own Small Secluded Haven called Babylon for all magical types to flock to, even at the cost of their lives.

It was a Utopia, so it stands to reason that it didn't last, and after the gates were closed to refugees, people started getting shot.

Fast-forward one hundred years after everything started going downhill, and our story focuses on our main protagonists:

A young webcomic that recently stepped in the plot, and that plot appears to be full of bureaucracy, corruption, and murder.

Currently updates every Tuesday and Friday, the first page can be found Here

. The ever-expanding Character Page can be found Here