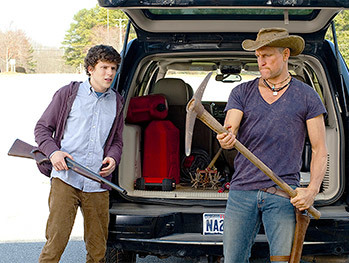 Believe it or not, the Action Hero and Action Survivor aren't so different that they can't share the spotlight in the same story together.

When both are paired they create an Action Duo similar to Sensitive Guy and Manly Man and Red Oni, Blue Oni; only these two will be practically opposites in just about every possible trait, most notably combat skill. The Action Hero, in the context of this dynamic, is of course Made of Iron, skilled at brawling and shooting, and brave enough to wade through any firefight. However, he will often be saddled by the plot with baby-sitting the Action Survivor, who can (at best) run and dodge extremely well, through endless firefights that may be targeted at him.

If the Non-Action Guy at least manages to compensate by being The Smart Guy, you have Brains and Brawn. If the Action Hero sacrificed a basic skill for their awesome training, the Action Survivor will help round them out. And if they're not good for anything else, at least the Action Survivor can play The Heart and/or Morality Pet to an Action Hero who's become a Knight in Sour Armor or otherwise hardened by his violent past. Expect these disparities and constant action to make them Vitriolic Best Buds. However, if they're compatible enough with each other in that they each manage to kick equal amounts of ass, they're probably Bash Brothers or a Battle Couple.

The plot usually requires the Action Hero either protect the Action Survivor as they try to escape a Closed Circle, or with an Escort Mission with the Survivor as a Living MacGuffin. Occasionally, the Survivor takes up the role of Side Kick and "sells" his skills as useful to the Action Hero on his mission. They usually form a working partnership, even becoming friends.

A common portrayal is playing the two as Short-Range Guy, Long-Range Guy pair, normally with the badass being a short range fighter and the action survivor supporting from cover. The roles can occasionally be reversed, however: A Cold Sniper handing his Bumbling Sidekick an ax and using him as Zombie Bait is not unheard of.