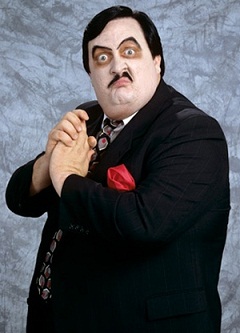 Paul Bearer (real name William Alvin Moody, April 10, 1954 – March 5, 2013) was a WWE manager and former wrestler, best known for his years managing The Undertaker. During the course of his tenure at WWE, he also managed Mankind, Vader and Kane. In kayfabe, his character was portrayed as a funeral director with certain mystical powers centered around an urn that he carried with him that seemed to empower whoever he managed. He was also later revealed to be the biological father of Undertaker's half-brother Kane.

He had also been a funeral director and mortician in Real Life, which was the inspiration for the gimmick.

He passed away due to complications from a blood clot on March 5, 2013. This didn't stop WWE from using his (supposed) ashes as a gimmick in various matches. The next year, Paul Bearer would be inducted into the WWE Hall of Fame.

"You can read my tropes, Ooooh YEEESSS!":