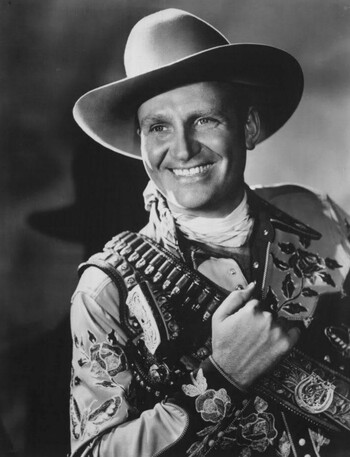 The man in the white cowboy hat was a hero to me
He was then, he is now, and I guess he always will be
And every so often I go back in time and I dream
And I see Gene Autry go ridin' across the big screen
—Marty Robbins, "Gene Autry, My Hero"
Advertisement:

The Singing Cowboy and Star of The Gene Autry Show, Orvon Grover "Gene" Autry (September 29, 1907 – October 2, 1998) was a singer, songwriter, guitarist, and actor. He worked as an actual cowboy in his early life, and had playing and singing gigs dating from The Roaring '20s onward.

In 1937, Autry recorded an original song written by himself titled "That Silver-Haired Daddy of Mine", which went on to become the first record ever to be certified in gold for over a million copies sold. In 1939, he received another gold record, this time for what would eventually become his Signature Song: "Back in the Saddle Again".

Autry also acted in several Westerns, both on TV and in the movies, and was the original owner of Major League Baseball's Los Angeles Angels. By the time he retired from show business in 1964, he had appeared in nearly 100 films and made over 600 records. His body of work is credited with help bringing Country Music to a national audience. He is to date the only person to have a Hollywood Walk of Fame Star awarded in each of the five categories (film, television, music, radio, and live performance).