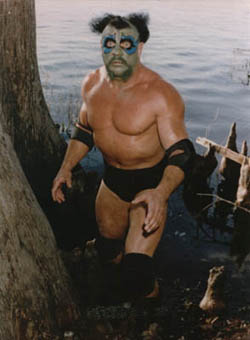 Byron James John Robertson (1939-2007) was a Professional Wrestler from Kitchener, Ontario, Canada best known for his work from the 1960s through the 1980s as Dewey Robertson and, later, as The Missing Link. He started in Toronto as Dewey Robertson as a Face and also worked in various territories in the U.S. He and Billy Red Lyons had a run under masks as the Tag Team the Crusaders. He started the Link gimmick in 1983. Over his career, he would compete for various National Wrestling Alliance territories, for the AWA, WWE, "Cowboy" Bill Watts' Universal Wrestling Federation and for several independent promotions. Among his in-ring achievements, he was a 1x NWA United States (Tri-State) Tag Team Champion

Not to be confused with The Missing Link or the Laika film.