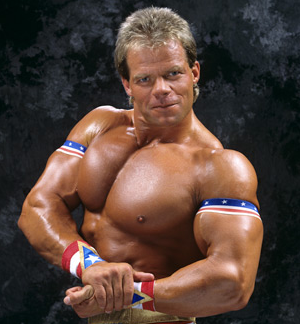 He debuted in Florida and was pushed hard right off the bat, defeating Chief Wahoo McDaniel for the NWA Southern (Florida) Heavyweight Title

a mere 19 days into his career. He would hold the title two more times before National Wrestling Alliance promoter Jim Crockett closed down Florida. Crockett, obviously sensing drawing power in Luger, brought him up to WCW, where he was x5 NWA/WCW United States Heavyweight Champion

, and earned the first of his three NWA/WCW Tag Team titles

, winding up as the second winner of WCW Triple Crown ever.

After leaving WCW in 1992, he jumped to the WWF to be part of their ill-fated World Bodybuilding Federation. After that failed, Luger debuted in WWE at the start of 1993, where he would feud with Mr. Perfect until Hulk Hogan left after losing the WWF Championship to Yokozuna at King of the Ring. On July 4 on the U.S.S. Intrepid, Luger became the first person in WWE to bodyslam Yokozuna, beginning a feud with him over the championship. However, Luger was never able to actually beat Yokozuna for the title, and ended up in the midcard before he suddenly jumped back to WCW on the debut episode of Nitro, where he remained to the bitter end. He would make sporatic appearances in TNA and elsewhere before retiring to Crockett's old turf, Atlanta. He would later suffer a spinal stroke in 2007, and spent three years relearning how to walk with the help of a walker.

Not to be confused with Lex Luthor, although apparently that is where he got the name.