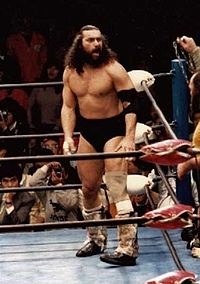 "...YOU DON'T SEE ME CRYIN', YOU DON'T SEE ME DOWN ON MY KNEES BEGGIN' BOUT IT, I'M GONNA TAKE CARE O' BUSINESS, AND BUSINESS FOR ME AND ME ONLY AND THAT'S THE WAY I WANT IT TO STAY."
Advertisement:

Frank Donald Goodish (June 18, 1946 – July 17, 1988) hailing from Uniontown, PA was a former American football player for the Washington Football Team from 1969 to 1971 in the so-called "Taxi-squad" who winded-up as one of the most famed professional wrestlers of all time known under the ring name of Bruiser Brody. Paving his way as maybe one of the most feared and revered performers who ever step into the ring due his displays of complete and utter brutallity. Some of his feuds were the matter legends are made of as those against Abdullah the Butcher, The Fabulous Freebirds and the likes.

He competed throughout the world, having several succesful stints working for The American Wrestling Association, some National Wrestling Alliance territories such as The St. Louis Wrestling Club, The WWE (Then known as the World Wide Wrestling Federation), Paul Boesch's "Houston Wrestling" but particularly All Japan Pro Wrestling, World Class Championship Wrestling (Dallas, TX) and the World Wrestling Council (Puerto Rico).

Among his achievements were holding the NWA International Heavyweight Title

While working for the WWC, wrestler Jose Huertas Gonzales, aka Invader #1, murdered him by stabbing him to death in the shower before a match. He was tried in a Puerto Rican court and was acquitted on the grounds of self-defense in a very controversial trial (such as the prosecution witnesses not being told in time to actually show up.)

"NOW, I WANNA TELL YOU SOMETHING... THESE TROPES, WHETHER YOU LIKE IT OR NOT, ARE ASSOCIATED WITH THE `KING KONG´ OF WRESTLING, AND THERE'S NOTHING, NOTHING YOU CAN DO ABOUT IT... HUSSS... HUSSS... HUSSS!!!":