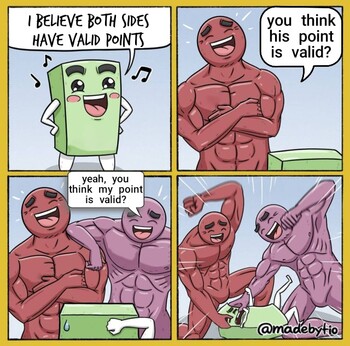 On one hand, having an absolute view of the world being Black and White is seen as an unhealthy trait in characters. On the other hand, characters believing in the idea of Grey-and-Grey Morality and people being similar, then cranking it up to the illogical extreme of "Everyone is just the same.", even in the context of situations where one side is unambiguously in the wrong or right end of the moral spectrum. Or even both sides are unambiguously good and evil.

These characters are most likely (but not always) going to be a Straw Nihilist, a Misanthrope Supreme or at least someone who may be Stupid Neutral. They would try to apply their worldview through copious amounts of Insane Troll Logic, with them doing anything to prove that everyone is no different in morality than one another. When it comes to them dealing with heroes and villains, they would try to ensure that both sides would eventually become indifferent to one another, from encouraging morally questionable actions to the heroic side to convincing the villainous side that they too have sympathetic qualities to their faction. Or sometimes becoming apathetic to both sides.

This usually applies in non-Grey-and-Gray Morality scenarios (the most common being Black-and-White Morality.), though in some cases, it can apply if said character's beliefs make them part of the shades of conflict (though sometimes, said worldview would have them go further down the scale).

A direct inversion of Black-and-White Insanity. See also Not So Similar.

Compare Villain Has a Point and Jerkass Has a Point. Contrast Rousseau Was Right (everyone truly is good), Humans Are Bastards (everyone truly is bad) and Grey-and-Grey Morality, Good Versus Good, Evil Versus Evil (for settings where the world actually operates in a way that makes this kind of worldviews completely rational), and Golden Mean Fallacy (the belief that the "correct" way is always in the exact middle between two extremes). Contrast Above Good and Evil (my goal is more important than good and evil).