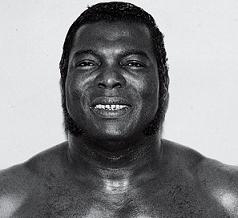 Houston Harris (July 10, 1924 – January 20, 1998) was an American professional wrestler who competed from the 1949 through the 1990s as Bobo Brazil. Trained by Jumping Joe Savoldi Jr, he competed in the WWWF, the AWA, various National Wrestling Alliance territories, All Japan Pro Wrestling, and some other promotions. In particular, he was a HUGE star in Detroit, regularly feuding with the Sheik. Among his in-ring achievements, he was a multiple-time WWWF United States Heavyweight Champion